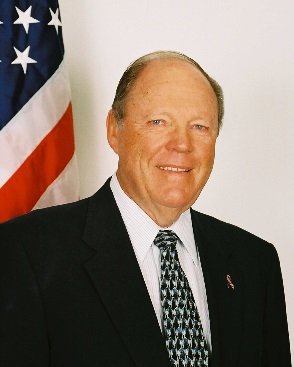 Marion Ashley, a native of Riverside County and member of a pioneer Perris Valley family, has long shown his deep commitment to the people of Riverside County. Along with his family, including Mary, his wife of more than 60 years, his six children, 19 grandchildren, and 9 great-grandchildren. Ashley has worked for decades to improve the lives of his fellow citizens.

After years in the private sector, including his work as a CPA with a national accounting firm, corporate executive, banker and the founding of a real estate investment firm, Ashley decided to become more directly involved in the public sector when he served from 1973-1981 as a Riverside County Planning Commissioner and was elected to a seat on the Board of the Eastern Municipal Water District in 1992-2002.

Since his election to the Riverside County Board of Supervisors in 2002, Ashley has become a respected leader on regional issues. As a County Supervisor he oversees a budget of $5.3 billion and sets public policy for over 2.3 million people.

From his Chairmanship of the Southern California Water Committee and Inland Empire Health Plan, to his leadership on the Riverside County Integrated Project (RCIP), and the Perris Valley Metrolink Line, to his experience in water issues, Ashley has shown his expertise in five of the most crucial issues facing California’s future – jobs, transportation, water, health care and forward planning.

Ashley’s commitment is to the health and safety of the people of Riverside County. He has provided funding for more jail beds, new sheriff deputies, firefighters, district attorneys and probation officers during his 13 years as a County Supervisor.

His work for the public does not stop at the doors of the County building. He and his family have donated hundreds of acres of land in the hills west of Perris to help create a permanent nature preserve and countless charities can count on Marion to help. “Mary and I want our children and our grandchildren to have the same wonderful quality of life we knew growing up here in Riverside County,” Ashley said. “We can do no less.”